Keeping on top of your cash flow

In October 2011, Maria Savage and her partner Justin left their jobs in search of a spicier future. In January 2012, Bombay Burrito  was born.

Bombay Burrito does what it says on the wrap; it fills the Mexican burrito with Indian flavours. But Maria and Justin had to do more than fuse two cuisines to carve out a niche in the crowded London street food market.

So they worked 12 hours a day, seven days a week on market and competitor analysis, costings, funding, branding and writing a business plan. Then they handed out the business plan to friends and family, who had committed, in principle, to funding the start-up, before heading off to India.

While they never planned to become the chefs at Bombay Burrito, they wanted the brand to be authentic. So they travelled around India discovering different regions, flavours and cultures, gathering inspiration for fillings, naming and branding. The name Bombay Burrito was coined on the trip, just before the couple returned to London. When they got back, the investors had had time to examine the business plan and they were ready to pledge money in return for equity.

Bombay Burrito Ltd started trading in April 2012, from a Brick Lane market stall, where the couple tried out different ingredients and new ideas. This testing phase was crucial for them ahead of securing a permanent location. In September 2012, they acquired the lease at their current Islington location, renovated the space and opened in December 2012.

The impact of starting up with very little money

They set up on a shoestring. Maria explains:

“The reality was that we probably didn’t start with enough money. We raised funds from friends and family because we felt it’d be counterintuitive to open the doors of a new venture and start making loan repayments straight away. But what that tight budget meant was that we didn’t take on staff and we didn’t do any marketing.”

The result was that the business didn’t move into profit for almost five years.

“We were at break-even for a long time, which is really tough – you kind of want to fail fast if you’re going to fail”, admitted Maria.

“You want to be able to say, ‘ok, this is not sustainable’ or start making some real money. We were in between for so long. We really needed to go beyond break-even in 2017, with the cost of ingredients going up, Brexit, a five-year rent review and with the rate hikes that every UK business had on 1st April 2017. Even with all of that, we’re doing great. It’s a bit disappointing that so much money is going out of the door, money that we would’ve held on to in 2016. But that’s the reality of it all.”

How did Bombay Burrito finally kick start this growth?

A big part of the business’ growth in 2017 was diversification. Bombay Burrito is right by a university so a large part of their customer base leaves London during Easter, summer and Christmas holidays. And because their product is spicy, it’s more popular during cold weather. To attract the lunchtime crowd from local offices and to keep trade up during warmer weather, Maria wanted to launch a new summer menu. She explains how they made it happen:

“When we got a flyer through about Barclaycard’s Transfer to Bank facility, we successfully applied to transfer £3000 of the credit limit on our Barclaycard Business Card  into our Barclays business bank account as cash. We used this cash flow boost to print new leaflets, pay additional staff to distribute these and to work in the restaurant itself.”

Still true to not taking on costly debt, Maria repaid the money in full within the interest-free period (three months).

“It was the perfect option for us; it meant we didn’t have to wait until October to launch a summer menu! It gave us the breathing space we needed to take positive action for the business and develop new revenue streams - while meeting our overheads and keeping the lights on.”

Maria happily explained that the new summer menu was pretty much the sole reason why Bombay Burrito averaged 30% growth year-on-year throughout June, July, August and September.

According to recent research, cash flow keeps 63% of small business bosses awake at night 1. 27% of those asked said they hadn’t been able to expand a product range because of a lack of working capital. The same percentage said they couldn’t carry out activities to attract new customers1 . 22% said it stopped them from opening in a new location1.

Anecdotally, Maria said that 2016 was bad for a lot of restaurants, while 2015 was good. So 2016 felt like a bit of a blip for Bombay Burrito. And while there will always be unexpected challenges in business, like rate increases, Brexit and so on, there are ways to counteract business challenges.

How Bombay Burrito spiced up their business: 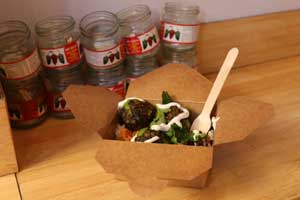 For Bombay Burrito, the answer to accessing cash, for growth was a business credit card solution.

Could this work for you?

These actions clearly worked for Bombay Burrito, and staying open for five years is in itself a huge achievement. So we can learn a lot from Bombay Burrito’s tenacious business owners, Justin and Maria.

The Barclays Bank PLC Group takes no liability for the impact of any decisions made based on information contained and views expressed from the third party listed.