Kath is struggling to cope after separating from her partner

It’s been a difficult time for her family, and things won’t be fully settled until Kath’s divorce has gone through and they can begin to adjust to a different way of life.

Before her separation, Kath had enjoyed managing the finances with her partner, who was the main earner for the family and covered most of the bills. Now she 's struggling to cover her share of the bills. She's worried because:

Not knowing what to do with the finances is one thing, but Kath was finding it really difficult, not to mention emotionally taxing, making ends meet.

Kath was very anxious about ringing Barclaycard, but really needed some advice on what to do. When she called, she was put through to one of our support team, Peter, who reassured her straight away.

Peter gave Kath time to explain things in her own words and wasn’t judgemental or demanding, as Kath had feared

Together they created a repayment plan that Kath could afford now, and put a longer term plan in place for when the final settlement had gone through. Peter explained what information he needed and why, as well as how it would affect Kath's credit score and what could be done to help

He checked that Kath knew she could access her Barclaycard account online or via the Barclaycard app to make debit card payments, change payment due dates and, when she could afford to, set up a Direct Debit

He also advised that there is free help and advice available and that she should also check out the government website for information and services available to her. We’ve included links to organisations that offer independent help and advice in the ‘Other ways to get help’ section below

Kath was nervous about calling as she’d never handled the finances alone before, but Peter listened and gave her everything she needed to confidently move forward and keep things covered until the settlement.

A separation or divorce can have a huge impact on your family and your lifestyle, causing emotional upheaval for everyone. Worrying about your finances just makes the situation worse.

You're not alone - we're here to help

We know your debts aren't going to disappear on their own, but we really can help. If you get in touch, we'll ask you about your income and outgoings so you can feel confident you're only repaying what you can really afford. And your priority payments – Council Tax, rent/mortgage repayments and household bills – will always come first.

It's probably the last thing you want to do, but giving us a call won’t make anything worse. We won't spring any surprises on you; our advisers are here to listen, understand and agree a solution with you – not demand payments you can’t afford.

You can rest assured, we’ll ask your permission before we do anything and check how you feel about your other finances.

We'll try to provide you with help that’s clear, practical and easy to understand. Also, we'll advise you where to find free and independent help.

Get in touch to find out how we can help

Speak with our support team on:

Calls to 0800 number are free from UK landlines. Mobile charges may vary.

The line is free and open Monday to Friday 8am to 9pm, Saturday and Sunday 9am to 9pm.

Use the Barclaycard app

Talk to us anytime using our 'Chat' service. You can find it under 'Contact us' on the help page. It's secure and easy to use and if we can't answer you immediately we'll send you a notification when we reply, so there's no need to wait.

More about the app

Write to us at:

Other ways you can get help

If you're struggling with a few different debts or money worries in general, there are organisations that may be able to help:

The Money Advice Service provides a range of free and impartial money advice over the phone and online, including tools and calculators to help you manage your finances.

Are you receiving all your benefits?

Find out if you're getting all the money you could be entitled to.

Visit entitledto and use their free benefits calculator to understand if financial support is available.

You can talk to The Samaritans anytime you like, in your own way, and off the record.

To protect the privacy of our customers, we have used photographs of actors and fictitious names, but they are based on real situations.

How close are you to a Debt Problem?

If you're worried that you need help with your finances then you can try StepChange Debt Charity's 60-second debt test. By answering a few simple questions they'll be able to tell you if you need debt advice. 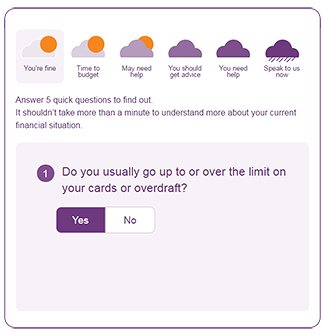